03 Nov 2015 - Athletics, Activities, Aquatics, SAISA, Volleyball
Boys’ Volleyball Team Exceed Expectations in Colombo
Our trip started out with an exhausting flight schedule and an eight hour, overnight, layover in the Mumbai Airport. However, the time seemed to speed right by. Being in the company of the boys on the team, as well as the girls’ team, allowed us to enjoy ourselves. Once we arrived in Colombo, we had an opportunity to rest and catch up on sleep in a hotel. Following these events, we finally made our way to the school and met up with our hosts to rest up for the night. 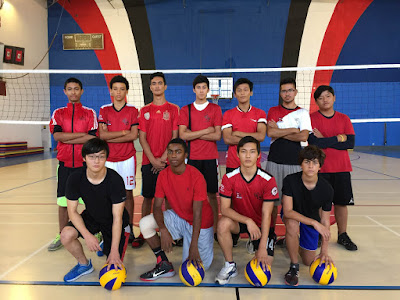 On the first day we were to play the host school in front of the home crowd. We took the victory in an intense three set battle against the Geckos. All of us were very pleased with the way we played. The second game on day two was a bit shaky against Lahore in another three set encounter, but we managed to claw ourselves out trouble and snatch another victory. The next morning we had to play against AISD (Dhaka), a great team with immense individual players, who managed to defeat us in an intense and yet another three set match. The team was showing great improvement from where we first started. We also got together after each game to reflect upon what we did well and what we could improve. We then went on to claim victory in the next two games against ISOI (Islamabad) and AISD JV (Dhaka Junior Varsity) placing us in the semi-finals against KAS (Karachi). This team had two colossal hitters, the Essa brothers, both of who had found a groove and they seemed to be unstoppable. The Lincoln boys showed great grit and passion to fight so hard against them, but the brothers just could not be stopped.

We got knocked out in the semi-finals against the champions of the tournament, but it still was not over for us. As a part of the team, I felt very confident to go out and play our game against AISD (Dhaka) in the 3rd-4th play offs, and it was because of our team spirit. We never dropped, we fought and we left everything we had out on that court. The team had found their maximum potential playing phenomenal volleyball, resulting in a win and a bronze medal for the team.
Share
Print page