25 Jan 2016 - Athletics, Activities, Aquatics, Football
Dear Lincoln families,
While a great Girls’ Basketball tournament was being held at Lincoln School over the weekend, our Boys’ Football team was representing the red, white and black in games against GEMS and Rato Bangala Schools.
The match against the leaders of the league, GEMS, was one that ended in a loss, but our boys worked extremely hard and there were good indications of development for the coaches. The Snow Leopards went into the game knowing they were the underdogs and perhaps gave the opposition too much respect as the score was 2-0 for the opposition in the first half. However, the character of the boys was evident in the second period when Avinash was on the end of a beautiful team goal. In the end, GEMS gave Lincoln their first loss in the league, but valuable lessons were learned for their next match.
A few days later, our boys played Rato Bangala, a team with a group of really talented players. The Snow Leopards started the game on the front foot and were rewarded with their enterprise, taking a 2-0 lead into half-time with Avi scoring both goals. It was by far the best game our boys had played, and they really clicked as a team. The final score was 3-1, with Suryansh adding the final goal. After the match, Suryansh said, “If we continue to play as we did against Rato Bangala, I know we can go very far in SAISA.”
Our team will play against TBS at the ANFA ground on Saturday, January 23rd at 4.00 pm. 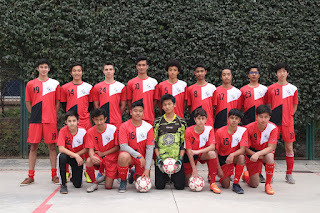 Another piece of exciting news from the Athletics & Activities Department is that we will have a new intern joining us from Amsterdam, Holland. Mr. Jerry Karg is currently pursuing a Masters Degree in Sports Administration and will be both helping and learning at Lincoln School as we culminate our 2nd season of Secondary activities and prepare for Season 3, which will see our Track and Field, Girls’ Football and Boys’ Basketball teams in action. He will be working with us in February and March.
On a final note, please remember that we are hosting the SAISA Girls’ Basketball Tournament on February 4-6. Thank you to all our host families for making this possible. Also, the LSPA will be sending around a form to help supply food to the coaches in the Hospitality Room. We would definitely appreciate any contribution made in this regard.
As always, thank you for your support.
Luke Davis
Share
Print page