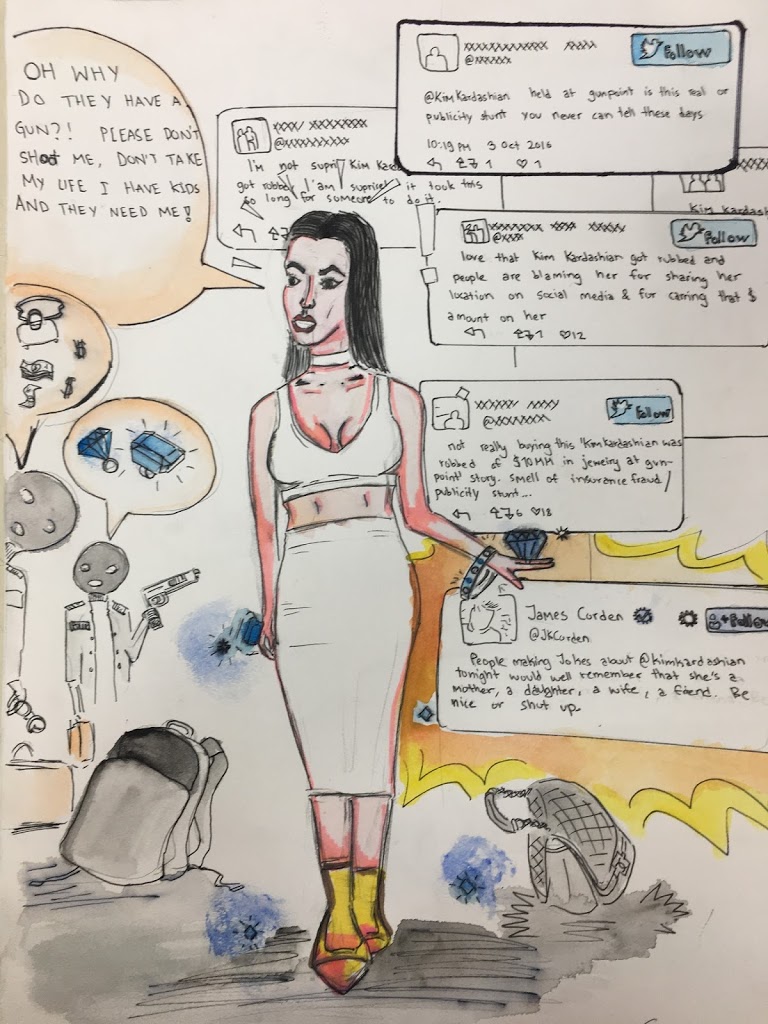 16 Dec 2016 - Blog, Expressions
Political Cartoon
by Geng Sanyavit Pattaranavakul
My Political cartoon is about Kim Kardashian’s robbery that took place in Paris on October 3, 2016 during the Paris fashion week. Kim Kardashian is a famous reality TV star from the “E” channel which is hosting her family show “Keeping up with the Kardashians” I did not pick this topic for the entertainment of other people or because it was big news that broadcasted all over the internet. I picked this topic because people need to know more manners and they need to respect the other people. I am aware that this is not a major problem and no one is dying but people should respect her more and not give her hate by judging her or accusing her of lies and false statements.
Kim Kardashian is a mother, a daughter, part of a family, a friend, and a human being. She was held hostage and robbed at gunpoint at a private residence. Putting yourself in her shoes when a group of men walk into your room with a ski mask on and holding a gun to your face, you would be frightened and scared. Your heart would drop immediately just too see your life flash by like a flashing star in the night sky. In her mind are her kids she cares about, North and Saint; they’re still young and still need their mother to take care of them and to grow up with. The is a fearful and scary situation for a woman all alone. Even though she might show off a lot at times, she has her rights, everything she shares is hers. It wasn’t as if she borrowed the diamonds or stole them, she owns them, and this shouldn’t be the reason why people are throwing shade at her. To make this point clear, Kim Kardashian has every right to the pictures she shares with her diamonds, or her fashion accessories.
I love the Kardashians and this might be the reason why I’m supporting Kim and her family, I have a lot of respect for her. In my cartoon I’ve drawn Kim Kardashian in the middle of the page to show that she’s the main character to this cartoon. I’ve put the robberies by the right side of her, by doing this it gives her more attention to the audience and the main idea of this political cartoon. Next to her by her left are the twitter rants of people on social media criticizing her of making money by lying and accusing a wrong statement saying that she’s doing this as a public stunt to get attention. Below all the tweets I had one tweet from James Corden. James Corden is a famous celebrity from the UK and he have a late night show and talks with famous celebrities.
James Corden is pointing out that Kim Kardashian doesn’t deserve the negative energy and that she’s a person not a suspect where you can criticize her and she should at least receive respect as a human being, and he’s right. While Kim is enduring this situation she doesn’t need the negative energy around her; she needs support from everyone and we should send her all the support she needs.